A decade after its founding, New Orleans was home to at least 37 women who had been deported from France in 1719. Most of them had been unjustly pronounced guilty of prostitution. This interactive map makes it possible to learn who they really were and where they lived in New Orleans.

In 1731, an architect’s draftsman named Gonichon produced this map, considered the most accurate depiction of New Orleans a decade after serious construction on the new capital began. Gonichon’s map shows all the city’s original buildings and its first streets. On the northern edge, you see what residents already called Dauphine Street, even though the actual street did not yet exist.
Each plot of land was numbered, and an accompanying chart listed the owners of most properties. In many cases, Gonichon’s map makes it possible to determine precisely who lived where. In all, of the roughly 200 privately-owned properties in New Orleans in 1731, between 8 and 10 percent were in the hands of women who were banished from France in 1719. In many cases, these deported women had cleared the land and built the homes that sat on their lots with their own hands.
The interactive map shown here illuminates these women's lives and their presence on the land, using Gonichon's map as a lens and a guide. Click on the markers to learn more about the women who lived here. A few contemporary photos of the buildings now found on the women’s property have been included.

In 1719, the Parisian police force was given free rein to arrest women. The development of the newest French colony, the immense territory known as “Louisiana,” had suddenly become a priority, and officials were willing to use any means necessary to acquire female colonists. Any woman found on the streets of Paris was at risk of being quickly incarcerated on trumped-up charges and then shipped off across the Atlantic. A few traveled on a vessel named Les Deux Frères, while most were transported on a ship called La Mutine, or the Mutinous Woman. Of the hundreds arrested in police raids, roughly 188 women were taken from Paris in chains. About 60 survived the journey. In 1720, those survivors found themselves on the Gulf Coast. Most soon married and began new lives all over the colony – from Natchez to Mobile, from Biloxi to Arkansas, from Natchitoches to Illinois. During the first decade of New Orleans’s existence, at least 37 survivors resided there. Many women deported in 1719 were among the original owners of property in what is now the French Quarter. 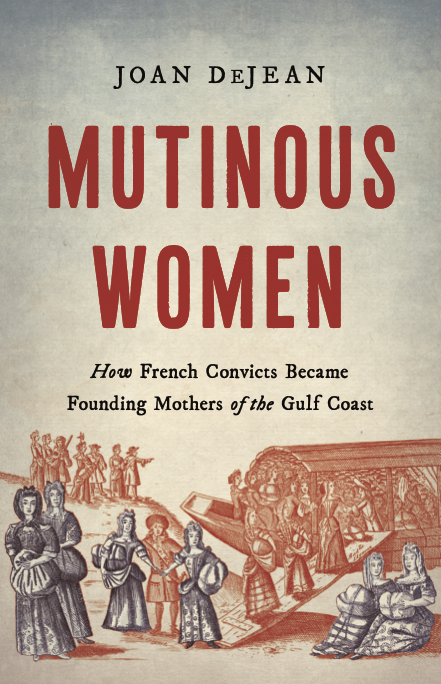 Joan DeJean was born in Opelousas, Louisiana. She was educated at Tulane (Newcomb College) and Yale University. She taught courses on seventeenth- and eighteenth-century France at Yale, Princeton, and the University of Pennsylvania, where she is Trustee Professor. She has done research in French archives since 1974, primarily in the archives of Parisian prisons held in Paris’s Arsenal Library. It was in the Arsenal that, a decade ago, she came across the earliest documentation describing the arrests and deportations of the Mutinous Women who helped found and build New Orleans.